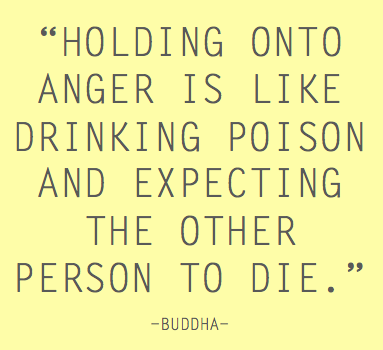 Most people experience anger in some shape or form from time to time. For some, it’s an explosive outburst and for others it’s more of an inward compression of negativity.

However you personally express anger, be aware that it is doing you some harm and you would be better off without it.  Today I’m going to break down why anger is so detrimental, what anger actually is and where it comes from, plus some tips for reducing it.

Someone wise once said to me:

“Holding onto anger is like drinking poison and expecting the other person to die.”

If you think about that statement for a moment – there’s a lot of truth in it. When we are angry, it’s usually at someone else or something else and so we experience extreme feelings of negativity towards that person.

The irony is that often the person whom we are directing the anger towards, is blissfully unaware that we are doing so! This means that the only person who is receiving the anger is ourselves. And what’s the point in that?

Let’s break it down. Anger is an emotional reaction to something that is not turning out how we would like it to. So, it’s essentially a control issue (like most problems). When we feel angry – it’s because someone did something that we didn’t want them to or some kind of circumstance has gone in a way that we didn’t plan.

As human beings we have this innate desire to be in control 24/7, but all this does is bring frustration and discomfort into our lives. The sooner we learn to let go and stop trying to control everything, the easier it is to enjoy life and live successfully.

The dangers of anger

Not only does anger eat you up inside and cause all sorts of health complaints (angry people are three times more likely to have a heart attack than calm people), it also puts you into a very vulnerable state. The irony is, when you’re angry – you’re not in control (and control is the very thing that you are seeking!).  When you’re not in control, you can end up saying and doing things that don’t reflect the real you.

How many times have you regretted saying things in the heat of an argument? How often have you felt embarrassed at the thought of how you behaved during an angry outburst?  How many friends and family members have you hurt because of your own anger?

The sad fact is – anger showcases the worst version of who we are, and it does little to advance us in any way.

Now that you’re aware of the damage anger is doing to you (and those around you), it could be time to make some changes.

The alternative is letting the worst version of yourself take control – and that’s not a pretty sight.

The first step is understanding why we experience anger in the first place, and as I mentioned earlier – anger is often an attempt to control things. So to overcome urges to control, the solution is to simply let go of whatever you’re trying to control and go with the flow a bit more. The reality is that it’s not physically possible to be in control at all times, and so the sooner we learn to roll with the punches, the smoother life becomes.

It can also really pay off to simply observe any feelings of anger as they arise – and try to step outside of the emotion its-self. What happens when you do this, is that you eventually go past the anger and your emotions settle back down again. It’s just a waiting game.

Choose to leave the worst version of yourself behind by working on ways to reduce your anger. These 5 steps will help you get started.

1. Start by becoming aware of how often feelings of anger pop up.  Did you realize just how often you were caught in the grips of anger?

2. Observe why you are feeling angry in the first place – what is it that you’re trying to control?

3. Notice if the person or thing that you are angry at, is even aware of how you’re feeling? Ponder if it’s worth being angry if the only person it’s hurting is you?

4. Detach yourself from the emotion of anger its-self, sit back and observe the feelings and simply wait until the anger dissipates (I promise it will at some point).

5. End with a positive spin – choose to believe that even though things haven’t gone as you originally planned there’s always something to learn from the experience (look for a positive)