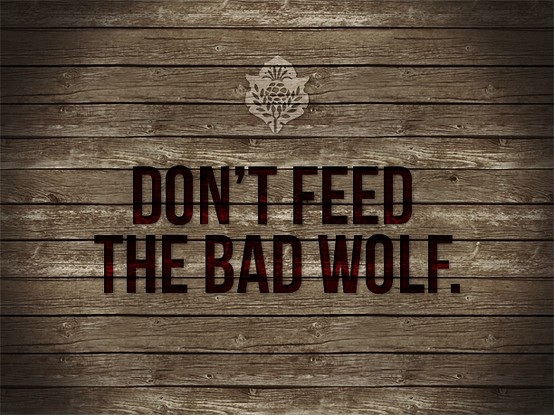 An elderly Cherokee Native American was teaching his grandchildren about life… He said to them, “A fight is going on inside me, it is a terrible fight and it is between two wolves. One wolf is evil—he is fearful angry, jealous and negative. The other is good—he is happy, peaceful, positive and content. The grandchildren thought about it for a minute, and then one asked his grandfather, “Which wolf will win, Grandfather?” The Elder smiled and replied, “Whichever wolf you feed.”

The human brain produces approximately 70,000 thoughts on an average day. Not all of these thoughts are useful, and we certainly don’t act upon every thought – that would be a lot of actions! We filter out those thoughts that we consider to be ‘useful’ and we disregard others. So essentially, we choose which thoughts we listen to.

The point of the story is that everyone has both negative and positive thoughts flying around their heads everyday – the trick is deciding which of these you will listen to.  It’s a pretty simple equation: Feed the negative thoughts and you’re likely to end up experiencing negative states such as stress, anxiety, fear, anger and sadness. And these states will usually sabotage your life in some way. Feed the positive thoughts and you’re likely to experience happiness, fun and an all-round sense of peace, plus you are much more likely to achieve what you want in life.

In-fact imagine how different your life would be if you didn’t listen to any negative thoughts and only listened to the positive ones. Imagine how much more you could achieve.

It boils down to a simple choice…you choose.

Here are my top 5 tips for dealing with negative thoughts:

To break down your own negative thinking patterns so you can learn how to control your thoughts, contact me to find out more about my coaching programs.

Know someone who often feeds the bad wolf?! Share this article with them!