How to Stop Negative Thinking in it’s Tracks 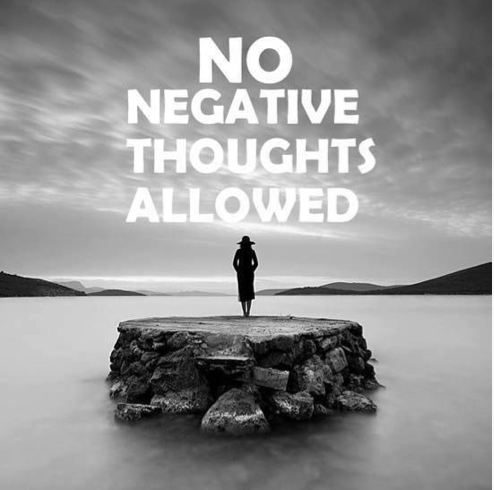 How often do you find yourself thinking negative thoughts? Do you catch yourself getting caught up in a whirlwind of negativity and before you know it your mind (and your day) is starting to spiral downwards?

Negative thinking is probably the most unproductive thing we can ever do as human beings. It’s also the number one thing that stands between you and your own happiness and success in life.

Yet, it seems to be such a natural habit for most people. Let’s look at why and then I’ll share with you a few tips for stopping negativity in it’s tracks.

The cycle of negative thoughts

So how do we end up being so negative all of the time? Well, all it takes is one thought. Here’s an example:

Suzy might have one single negative thought about the weather. Say, she leaves her house and suddenly it starts to rain and she’s caught without an umbrella. Enter negative thought number one:

“Of all the times, I can’t believe it’s started to rain now! Why didn’t I think to check the weather forecast and bring an umbrella!”

So this first thought has gone from being negative about the weather to blaming herself for not checking the weather forecast. Blame by the way, is one of the most unproductive behavioral traits because it’s essentially negative thinking in action. Plus it’s not useful – it doesn’t help solve the issue – it just amplifies it and makes you feel worse.

“Typical! Now I’m probably going to get stuck in traffic and I’ll end up looking like a drowned rat by the time I get to work!”

So now Suzy has gone into worry mode and she’s painting the worst picture of how her morning could turn out. Instead of thinking about how the day could get better, she is literally thinking of the worst-case scenario.

“Ah I just know this is going to be one of those days where everything goes wrong! I can feel it!”

So by her third thought Suzy has managed to convince herself that she is about to have a really bad day. And all of this started just from one single negative thought about the weather.

Let’s break down what went wrong with Suzy’s situation.

When we get stuck in a negative thought process like Suzy just did now, it’s usually because we are intently focused on what’s wrong – not the genuine situation. Yes Suzy got stuck without an umbrella, but does this mean her entire day will be bad as a result? I would argue – no. In-fact what Suzy has done is blown this tiny problem out of proportion. She has unintentionally blocked out all of the good things that have happened that morning and focused only on this one problem.

You get what you focus on

This a super important point – what Suzy has done by focusing intently on her problem is create more problems. It’s almost as if one negative thought automatically triggers another one and it’s like a chain reaction. So without realizing it, it’s highly likely that Suzy will indeed have a dreadful day, but only because she is so focused on her problems.

Look at the bigger picture

If Suzy had chosen to brush off the very first problem where she got stuck without the umbrella, it’s highly likely her day would have been a hell of a lot better. She may well have decided to look at this situation in a positive light and to notice how refreshing the rain felt on her skin! When we expand our thinking and look at the bigger picture, it’s much easier to bounce back when small problems pop up.

The reality of the matter is, we will never escape problems for good because life is full of uncertainty and it’s not viable to have a perfect smooth life where everything happens exactly as we want it to. So start to view problems as challenges. Look for how the problem may be helping you in some way, even though at the time it may feel frustrating. You might also want to read my recent article to learn why being flexible can help you with problems: When Things Don’t Go Your Way.

1. Become aware of when you are thinking negative thoughts.

2. Think of the bigger picture – instead of seeing this problem as the start of many more problems, choose to see it as a solitary problem.

3. Remember that if you keep focusing on your problem it is likely that it will multiply into more problems!

4. Choose to focus on what is going well with your day instead of any minor hitches.

5. View any problems as challenges and look for how they are actually helping you in some way. Know that every problem teaches you something about yourself.

If you found this article interesting, please share it with others.