How to Build Your Confidence Back Up After Failure 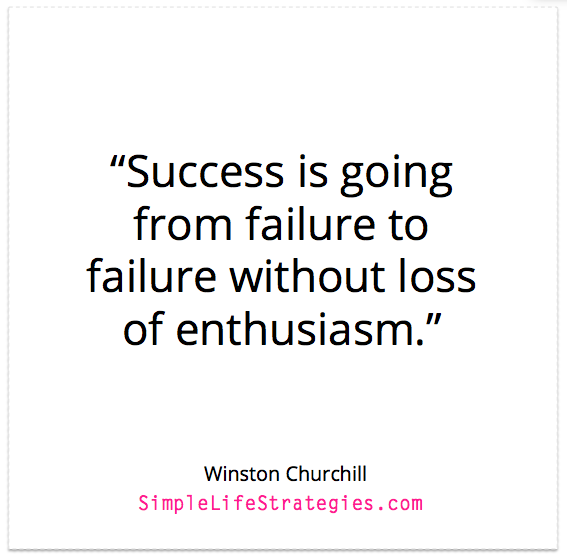 Have you ever had one of those days where something MAJOR has gone wrong?

You know, you’re tracking along quite nicely, on target with your work stuff, life’s going quite well, exciting things ahead of you and then BOOM, out of nowhere you hit a hurdle.

Something happens that, well, you didn’t want to happen.

Maybe you don’t hit your goal on time, you have a conflict with someone, or you just have a bad day.

You know, its easy to be confident when everything’s going great guns, but what do we do when things start to go awry?

We start to doubt ourselves.

And before long we’re on a slippery slope, each step taking us further and further away from what we want.

Have you ever noticed that? It’s like the opposite of momentum – or like a kind of negative momentum.

So how do we stay focused and keep our chin up when the going gets tough?

I’ve gotta be honest with you here. It’s not easy. But there are a few things that I’ve noticed work pretty well to hoik you out of that hole and get you back to your confident self again.

The first is to take a step back and notice if you’re being a little rigid about things? Have you set yourself a goal or a target that you’re unwilling to move on?

Because in my experience, life doesn’t always work in perfect time with your own goals & deadlines.

Of course it’s good to set deadlines, but it’s also important to have a little flexibility to move around if ‘hurdles’ pop up.

Have a goal, but be open to HOW and WHEN you reach that goal.

Ahh that’s a big one.

Because, what so many of us do is give up as soon as the going gets tough – or we don’t get what we want, exactly when we want it.

I’m guilty of this too.

I’m an over achiever and I catch myself setting these HUGE goals and then beating myself up when I don’t reach them.

Which leads me onto my next point…have you set yourself a ridiculously BIG goal?

Again, nothing wrong with that, but you’ve gotta cut yourself some slack if you don’t quite get there exactly when you wanted to.

So what else have I noticed…?

Well, on the note of bratty behavior another thing I do sometimes (maybe you do too?) is perceive whatever has gone wrong as ‘unfair failure’.

It’s easy to blanket everything as failure and blame external events. Maybe someone else didn’t deliver…maybe the timing was off…who knows what the many reasons were for something to go wrong…but there is another more likely reason and it’s this:

Maybe you were wrong.

Sometimes, it’s far easier to just face up to the fact that – hey, you made a mistake! NO big deal. You’re only human.

And then move on.

In other words, stop taking life so god damn seriously.

In most cases you’re little failure will not chalk up to the ‘big things’ in life.

Failure is success in disguise

And besides, what we forget during times of failure is that it’s an ESSENTIAL part of success.

Ha! What fools we are – worrying about how we failed, when we need the failures to show us the way.

Do you know it took Thomas Edison more than 10,000 attempts to figure out how to create electricity before he struck gold?

And yet he refused to view this as failure. He once said to a journalist:

Michael Jordan is another one. He famously said:

“I’ve missed more than 9000 shots in my career. I’ve lost almost 300 games. 26 times, I’ve been trusted to take the game winning shot and missed. I’ve failed over and over and over again in my life. And that is why I succeed.”

And it feels like I should add a third quote to this, just to round things off nicely – here’s Winston Churchill for good measure:

“Success consists of going from failure to failure without loss of enthusiasm.”

Admitting your mistakes, holding your head up high and having the courage to keep going – now THAT is a surefire sign of success (and intelligence)!

Tell me in the comments below – how do you deal with failure?