How the World’s Ugliest Woman has Inspired Millions 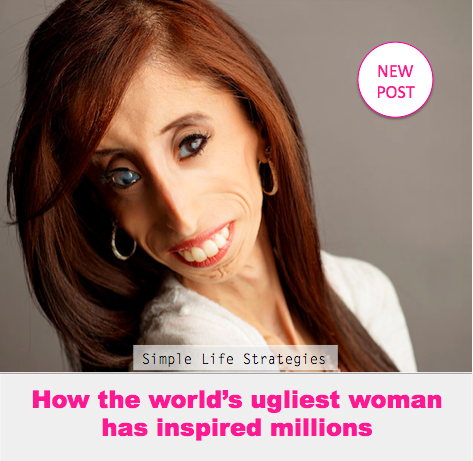 When she was growing up, Lizzie Velasquez was told that she was so ugly, she should do the world a favour, put a gun to her head and kill herself.

I know what you’re wondering. Did she do it?

Well the answer is no. Of course not. That’s not her style.

Lizzie Velasquez stumbled across a video of herself on the internet, with 4 million views, titled “The World’s ugliest woman”. To her horror there were thousands of cruel comments saying “Kill it with fire.” And “put a gun to your head and kill yourself.”

It’s impossible to understand how this situation would make you feel as a human being and how this would make you view humanity at large. The last thing you’d think it would do is inspire you. But that’s what happened to Lizzie. She took those words and “used them as a ladder to climb up to her goals”, she used the negativity from these online bullies to ‘light her fire’ and drive her towards reaching her own goals of becoming a motivational speaker, to write a book, to have a family and to get a degree.

What an incredible human being.

You see when Lizzie was born she was diagnosed with a very rare syndrome that means she is unable to gain weight. In-fact , she has never weighed more than 29kg and has zero % body fat.

Lizzie tells her incredibly inspiring story on TED X where she cheerfully bounces on stage and proceeds to rattle off the many benefits of her disorder. That’s’ right she focuses on the benefits – not how hard her life has been, or how unhappy she is or how limited she has been by such a debilitating syndrome.

And she does it with a light-heartedness that’s contagious…cracking jokes about how cheap it is to pay for just one contact lens instead of two and how she can easily ignore people who annoy her by placing them in view of her eye that has no vision. “They literally disappear!” she claims excitedly. Remember – this is the woman who was told by 4 million people that she was the ugliest woman in the world. Unlike most of us with problems that are highly irrelevant in the grand scheme of life, she really had something to wail about. Yet she chose not to.

The realisation of being different

In her TED talk, Lizzie candidly talks about her first day at school when she first became aware that she was different to the other kids. She describes their reaction to her as if they were looking at a monster, and her initial disappointment about how she was treated so differently.

“I’ve had a really difficult life, but that’s ok. Things have been scary, things have been tough. But my parents were my inspiration. They told me: ‘This syndrome will not define who you are. Go to school pick your head up, smile, continue to be yourself and people will start to see that you’re just like them.’ So that’s what I did.“

Lizzie skillfully keeps her talk light and breezy while she confronts what must have been a very painful period in her life. She describes how as a child every day she would look in the mirror and pray that the next day she would look different. Yet each day she would be disappointed all over again.

Yet it was that fateful day when she saw the video of herself online with 4 million views and the title Worlds Ugliest woman that really became the turning point for her. It forced her to choose between a life where she defined herself purely based on the way she looked, or a life where she would focus on what she did have.  Something clicked inside her head. She realized:

“My life is in my hands. I can choose to make this really good, or choose to make this really bad. I can open my eyes and focus on the things I do have and make those things the things that define me. I can’t see out of one eye, but I can see out of the other. I might get sick a lot, but I have really nice hair. Am I gonna let the people who said “Kill it with fire” define me? Am I gonna let the people who called me a monster define me? No. I’m going to let my goals and my success and my accomplishments define me.”

So Lizzie, took that negativity and used it as a catalyst to motivate her. She worked her butt off to make her dreams come true. She decided that the best way she could get back at all of those people was to show them that she could use those negative things they called her as a ladder to climb up to her goals.

And as I was watching this truly beautiful woman share her story of courage and inspiration it humbled me to think:

“Wow, if Lizzie can do that, if she can overcome that situation and all the time with a huge smile on her face, then what is stopping anyone else from doing the same?”

What is stopping you from achieving whatever you want to in your life? So you might have a few hurdles or challenges to overcome?! Are they anywhere near as hard as what Lizzie Velasquez had to face? I’m guessing not.

So all that’s left is one question:

What are you waiting for?

Because if Lizzie can do it, so can you.

1. First take a look at how you define yourself? What things do you focus on? Your appearance, your relationships, your faults?

2. Note if your define yourself in a positive or negative way? Are you happy with the way you currently define yourself? Does it bring out the best in you?

3. If the answer is no,  take some time to re-define yourself in a way that is positive and will enhance your life

4. Take note of any challenges, negativity or criticism and remember Lizzie. Choose to use this negativity as the fuel to fire you up and keep going!

5. Focus on what you do have, commit to your new definition of you and go after it right now! If Lizzie can do it, so can you.