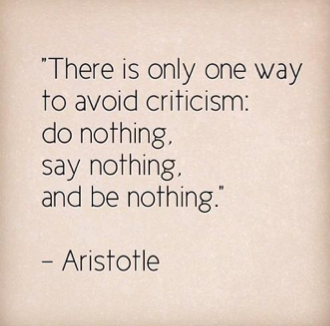 Have you ever had someone criticize you only to be left feeling inadequate and self-conscious?

Most people don’t enjoy criticism – however many successful, iconic people have a very unique take on criticism, with some even enjoying it. I’ll share their approach with you a little later in the post, but first let’s dive into why it can be difficult to deal with criticism in the first place.

Why is it so hard to handle criticism?

At times criticism can feel like a personal attack and it can be really difficult to react without being defensive. On some level, we all want to be liked and valued for who we are, so when someone criticizes us, this is a direct conflict with our innate desire to be liked and to feel of value.

Essentially one of the major things we do wrong is to take things personally and to mistake our behavior with who we are as a person. Just because someone criticizes something we have done – doesn’t mean that they are criticizing who we are or our individual self. So the first step is to separate the thing that is being criticized from your self.

Jody struggles with managing time. She had a strict deadline to meet at work and found herself running out of time and missing the deadline. Her supervisor pulls her aside and gives her some constructive criticism that she needs to work on her ability to multitask and prioritise, so she can reach her deadlines effectively.

Is Jody’s supervisor criticizing Jody herself? No. She is simply communicating that Jody’s behavior needs to change. The great news is that because managing time is not an aspect of who Jody is as a person, it’s something she can change and improve upon over time. The sooner we realize that our behavior is not who we are – it’s something that we are doing at one point in time, and more importantly something that we can change, the sooner we will be less affected by criticism.

Another reason why criticism can play a really negative part in our lives is that we can without realizing it, blow things way out of proportion. Have you ever received written criticism over email, or in a letter and taken it upon yourself to over generalize until the situation is so out of control that things seem much, much worse than they are in reality?

This is a common reaction. It’s easy to take things out of context or to mistake the tone of an email for something that was not intentional by the sender. The best way to overcome this is to get really clear with the person who is criticizing before you take things the wrong way. So, don’t react, simply respond by thanking them for the feedback and arranging a time to discuss it in more detail before you respond.

Another trick is to wait 24 hours before you respond. When we first receive criticism it’s normal for this to trigger a whole host of emotions including anger, sadness and defensiveness and so it’s best to let these emotions settle before you respond. You’ll find that the criticism won’t look half as bad the next day, once you’ve had some time for it to sink in. Plus, you will be able to approach the whole situation in a much more rational manner.

Check in on your ego

When we are criticized our ego naturally takes a beating. It’s important to check in and identify if you really believe that the criticism is unfounded or if you are just fueling an innate desire to be right. We all like to be right – but at times we do need a little direction from others who know better. So criticism can be a great opportunity to keep your ego in check and accept that at times, we are not right about everything and we have much to learn from others.

Change the way you view criticism

What we forget is that often, when people criticize us they are simply trying to help. What I’ve noticed when examining many, many, successful people from entrepreneurs and business people, through to successful home-makers is that they don’t view criticism as a bad thing – in-fact they view it simply as feedback to help them move forward.

If you can try and adopt this habit then you will be one step ahead of most people on the planet! If you think about it – without criticism how could we improve our behavior? In-fact it’s a necessary part of personal growth – and something that we need to embrace instead of avoid.

Refrain from over-analysis and take action

It can be easy to get lost in the quagmire of why you have been criticized, instead of actively trying to do something about it. The best approach to take is to spend as little time obsessing about the personality of whoever is criticizing you and to focus on the facts. The sooner you take action and start to try out various solutions, the sooner you will lose that nagging feeling in the pitt of your stomach that you did something wrong or aren’t good enough. The great thing about taking action is that it empowers us and moves us forward.

Use criticism to hone your problem solving skills

Instead of viewing criticism as a negative thing, you can choose to use it as a means of improving your ability to come up with solutions. Try to refrain from focusing on the fact that you have been criticized and turn your attention to finding as many solutions as possible to fix the problem. This will see you progressing both in a career aspect as-well as via your own personal growth. We may not be able to change the things that happen to us – and the people who criticize us, we do however always have the power to respond in a way that empowers us and aids our journey of self-discovery and personal development.

You can either let the criticism control you – or you can take control of the criticism. The choice is yours.

1. Don’t take it personally. Realize that it’s not a personal attack on who you are as a person. It’s simply feedback about how you have been behaving as of late.

2. Be careful not to blow things out of proportion. Take a step back and always clarify anything that you’re unsure of. It can be so easy to take things out of context in your own mind. Always discuss criticism to be sure you are not over-generalizing.

3. Postpone your reaction. Wait 24 hours before you respond. Allow any emotions to bubble up and then slowly dissipate. You will be able to take a much more rational approach the next day!

4. Check-in on your ego. Are you upset simply because of a desire to be right? Know that it’s impossible to be right all of the time and that there’s a lot to learn from others.

5. Change the way you view criticism. Choose to view it as feedback – not a personal attack. Remember that without criticism we are unable to grow and move forward.

6. Stop over-analysis and take action. Stop obsessing about who has criticized you and take solid steps to move forward.

7. Get problem-solving. Use criticism as a way to improve your problem solving skills. This allows you to empower yourself instead of feeling like you have done something wrong.

Remember – you can either let the criticism control you – or you can take control of the criticism. The choice is yours.

If you enjoyed this article, please share it with others.