Is it possible to be ethical and ambitious? 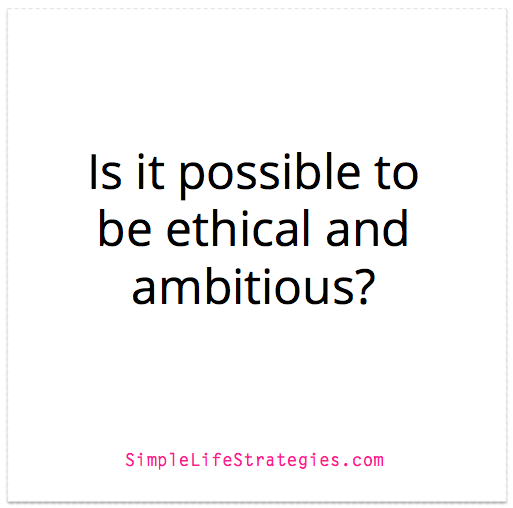 I don’t know about you but these last few weeks have not been the easiest ride!

I’ve grappled with tech problems of a magnificent magnitude as-well as health issues and then the crazy schizophrenic weather we’ve been having here in Sydney too!

Anyway, today I wanted to talk to you about a topic close to my heart.

Ever since I can remember I’ve always been ambitious.

And yet, I’ve always had this deep desire to make a difference in the world too.

But just how do the two meet?

And is it even possible to be wildly successful without compromising your ethical and moral standpoint?

Because, let’s face it, when we look around at the most successful, ambitious people in the world, most of them are in it for the money…the fame…or the glory.

For Christmas, a beautiful friend gifted me the book ‘Ethical Ambition’ and I haven’t put it down yet.

It totally opened my eyes to the possibility of combining success with ethics.

In-fact Ethical Ambition isn’t an oxymoron, says author Derrik Bell, but a winding road that likely feeds the spirit more than the pocketbook.

And this guy should know. He gave up tenure at prestigious Harvard, in protest over the lack of minority women in the faculty.

But instead of ruining his career, Bell found that he received more respect from others than he bargained for.

According to Bell, Ambition is not just about wealth, power and celebrity – but about a sense of accomplishment for standing up for what you believe in.

I guess that’s the whole point isn’t it.

Success without ethics…well it isn’t really success is it?

And that’s why a lot of the most successful and wealthy people on the planet usually end up eventually heading down a philanthropic path.

Facebook founder, Mark Zuckerberg is another case in point. Although initially led by his passion for technology and connecting people, he’s donated hundreds of millions to charity in recent years.

I guess the point is, wealth and ambition alone didn’t do it for them.

There was still a gaping hole.

Which reminds me of a recent episode of Graham Norton that I watched.

Ha. You weren’t expecting that were you 🙂

Anyway, Matt Damon was on the show and Graham asked him about the night he won an Oscar for Goodwill Hunting.

Instead of gushing about how great it was, Damon said this (I know this because I had to rewind it and take notes because I was so inspired by it! 🙂

“I was buzzing because I couldn’t sleep and I remember very clearly looking at the award and thinking – thank god I didn’t fuck anyone over for this.

Suddenly I had this thing wash over me where I thought:

“Imagine chasing that and not getting it…or even worse chasing it and finally getting it in my 80s with all my life behind me and realizing what an unbelievable waste.

Because it can’t fill you up.

If that’s a hole that you have, then that won’t fill it.

And I felt so blessed at 27 to have that awareness and literally my heart broke for a second as I imagined this other version of me, an old man saying ‘where did my life go, what have I done?”

Well Graham was not expecting that, let me tell you 🙂

But seriously, the man speaks the truth.

Ambition alone is not worth it.

All the shiny Oscars in the world won’t give you a sense of fulfillment.

And that’s why, when I went through my own process of finding work that really filled me up, I realized the importance of things like your values and adding a sense of meaning to whatever you do next.

The trappings of success are simply not enough.

So if you’re considering what you want to do next, then learn from the experts, Derek Bell and the unassuming Matt Damon 🙂

PS: Did you sign up for one of my free Career Masterclasses yet? If not, you can register for the Find a New Career in 30 Days Masterclass here. You’ll get access to a free career tool to help you on your search and I also take you through a mini values workshop so you can start to figure out what’s important to YOU. Register here.