What Jenny Kee said that Brought Me to Tears 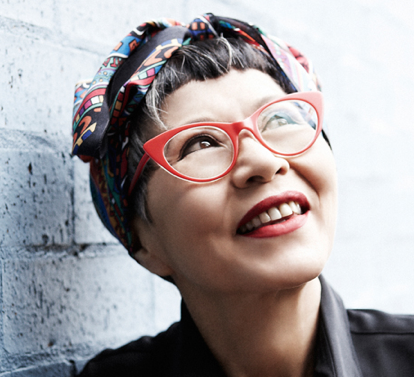 Have you ever experienced one of those moments where you’re so captivated that your whole being just freezes? Where someone utters a few carefully selected words and BOOM. That’s it. You’ve lost it. Those words have infiltrated every cell in your body and you know your life will never be the same again. This was me on Sunday, at Soul Sessions; riveted in my seat as Jenny Kee spoke ever so softly about her incredible life.

Jenny (Australian Fashion icon & practicing Buddhist) is a sleight and incredibly beautiful woman of Cantonese descent, born in Bondi and WOW has she lived.

This woman has REALLY lived! And her story at times made me have that lump. You know the lump I’m talking about – the one in the back of the throat where you just want to throw careless abandon to the wind and wail. Cry. Let go.

But I’ll get to that bit in a moment…first I want to share with you what makes this woman such an inspiration.

Eloise, our wonderful Soul Sessions host wasted no time at all in getting to the juicy bits first. And so the interview was commenced by asking Jenny what these four people have in common:

Now Jenny, dressed in a vibrant print shirt and her signature bright red glasses, has an air of someone who enjoys a good time. You would never have guessed though that as a teenage girl, she had romantic encounters with not one, but all four of these rock sensations of that time. One of the biggest names in music ever; John Lennon AND Eric Clapton..AND Keith Richards…AND Roger Daltry!

Jenny talked openly about her experience of the swinging 60’s and it’s not necessarily her achievements as a groupie that were inspiring, but her plain unabashed honesty about recalling that period of her life where ‘things got a little crazy’. She just did things that other people would have shied away from. Even when she talks about how they got to John Lennon, you can see that the sheer determination that she later used to conquer the fashion industry, was also present at a very young age.

Jenny talked of how her and her friends came up with a grand plan to jam the elevators of the hotel that John Lennon was staying at so they would force the Beatles to take the stairs…and guess what? It worked!! The girls got invited to a party…and the rest is history.

What I loved about this story is the resourcefulness and dedication to succeed. To go after what you want until you get it! It’s this kind of attitude that I find allows people to create the life that they want. They just make stuff happen.

It was when Jenny was in the height of her Fashion career (even Princess Diana was wearing her designs), that she realised she felt the unhappiest and this is what led her to Buddhism. Eloise asked Jenny what Buddhism means to her (as she is a practicing Buddhist).  Jenny went quiet for a moment and then gathered her thoughts. She very carefully selects her words and offers them with a rawness that cuts straight through. She is simplistic in her answers. She doesn’t talk too much, yet what she does say is very profound. Like many great speakers, she is comfortable with lingering moments of silence and this only builds the tension in the room.

“Buddhism is about connecting. We are all connected.”

Simple. Yet profound. Everything co-exists. We as human beings are all connected and it’s only when we forget for a moment that we are, when issues arise for us. Imagine if instead of only caring about our own needs, our own wants, our own lives, each and every person on the planet stopped to remember that we are all connected and to make decisions a little differently? To help out a neighbor, a friend, even a stranger. Because even strangers are connected to us as a species!

Jenny went on to articulate her thoughts further…

“Buddhism is the earth. It’s about remembering that we don’t own the earth, the earth owns us! And seeing the beauty of nature.”

Jenny spoke of her encounters with Australian Indigenous elders, as-well as Buddhist monks from both Tibet and Thailand where there is a natural respect for the Earth. Instead of utilizing the Earth as something for our own selfish needs, these ancient cultures have the belief that we do not take from the earth, instead we work with the earth.

And now for the moment when the lump arrived; when I felt choked by the emotions that poured out of this wonderful woman. More than 10 years ago, Jenny’s partner of 11 years, Danton, committed suicide. Jenny came home to find him lying on the floor with no life left in him. As she recalled the memories, each and every person watching could feel the pain and sadness of this time. A silent few seconds passed and she started to talk very softly, very slowly and very honestly about her experience. You see with Jenny, there is no façade. It’s as if you are having a one on one conversation with her and she is unveiling her deepest, darkest secrets to you only, no one else. The only way I can describe her state is one of presence, she is 100% present in the memory and she isn’t aware of the faces eagerly looking to her for a slice of wisdom. She’s humble and she’s real. She’s just being who she is with no apologies, nothing hidden. And it’s this rawness that is so beautiful.

When Danton passed away, Jenny lit a fire and kept it burning for 3 months. She described it as her way of adding warmth to her heart that had turned cold from losing the love of her life.

Years later, she would refer to the Tibetan book of living & dying by Sogyl Rinpoche and would notice that many of the things she instinctively did to cope with her own all encompassing grief were also hidden in this ancient text. She talks how this Buddhist book often comforted her in times of intense grief as she slowly dealt with the loss of her partner.

Jenny didn’t offer any magic solutions for dealing with grief, perhaps because there are none. She simply said that it took time and it was only by looking inwards and instinctively doing what her heart told her to that she was able to get through this time.

She did say that there was one thing that helped more than anything. Something that her Buddhist teacher said to her once that she will never forget. Words that etched into her soul and helped her to pull herself out of the sadness:

“Remember ALL of the Dantons, not just yours.”

What this Buddhist monk meant was to remember all of the people around the world who were also in pain and suffering, not just her own situation. To remove the focus from her own pain and to see it as something bigger, something that everyone goes through. By making her view more global, Jenny was able to remove the intensity of the pain of her own personal situation and she was left with a single gift:

The gift of compassion

When we remember that we are not the only ones suffering, when we look outside of ourselves and our own pain and we start to notice that others are in pain too, only then can we become compassionate. And so this incredibly difficult situation that Jenny had to deal with left her with a gift, one that ultimately sums up the philosophy of Buddhism.

As the interview drew to a close, Jenny reminisced about her meeting with his holiness the Dalai Lama. She described how as he leaned over to give her a blessing, he took a moment to look deep into her eyes – and in that moment he could see every second of her own pain and suffering. She described the moment as a pivotal one for her where she experienced in the eyes of another human being nothing but pure love and compassion.