How to Remain Calm in the Face of Road Rage 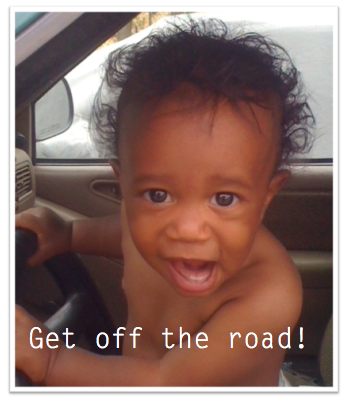 I’ve been driving for approximately 2 weeks and there’s one thing that has become painfully obvious to me. It’s not something I was expecting and not something I’m particularly happy about – but it exists so it’s time to find a way to deal with it.

What is it about driving that turns perfectly rational human beings into temporary screaming and shouting maniacs?

As a learner driver, guess what? I’m still learning! Yes I’ve passed my test, but the first year is where you REALLY learn how to drive. So…of course, I make mistakes. And you would think, because of the giant shiny P plate that sits on the front and back of my car, people would understand that and give me a break?

But alas no. Sydney drivers know no mercy. It’s as if they have all had brain hemorrhages and temporally forgotten that at one stage in their lives, they too were learning.

And so, I’ve been thinking a lot about road rage over the past few days because it’s been on my mind. It’s shown me a really ugly side of humanity, so I’ve done what I always do when something doesn’t make sense – and that’s tried to understand the meaning behind the behavior.

Every behavior has some kind of meaning behind it and I’ve thought long and hard about what it is about driving that brings out the worst in a person?

Here’s my first theory – because you are essentially anonymous when driving, you can pretty much do and say what you like without anyone knowing it was you. I mean really, would people scream and shout at another driver just for something as simple as stopping at the lights for too long, if they actually knew that person? I would say no.

If you ask me, it’s the worst form of bullying because the very reason that you need to hide indicates that you are not proud of your behavior, or that you know deep down that what you’re doing is not ethical or morally right.

In the same way, road rage definitely has some similarities to trolling because of the anonymity factor. The questions to ask yourself are:

* Am I proud of the way I behave in my car when I’m driving?
* Would I happily show this to my friends and family?
* How would I feel if my driving temperament was shown on live TV for everyone to see? Would I be embarrassed?

But guess what – it does exist, especially for the person on the receiving end. I can tell you one thing for sure, when people are dishing out their road rage to others, they are not thinking about how their actions may have impacted the other person.

Out of control egos

I’ve heard many people who are aggressive on the road say things to justify their behavior like:
* “People just don’t know how to drive!”
* “She shouldn’t be on the road!”
* “Who gave YOU a license?”

It’s like if you consider yourself a good driver then this gives you permission to scream at anyone else who isn’t up to your standards. I mean really, this is the ego having a field day! So someone may not be as good a driver as you. So what? Do the gracious thing and give that person a break – or even help them out! People have different skills and while some people may be exceptional at driving, others may lack in this area.

A week ago I had the pleasure of a very kind man helping me out when I was driving. I was trying to make a right turn onto a very busy road filled with traffic. The kind man noticed I had only just passed my test and stopped the flow of traffic and guided me across the road.

WOW. Now that was just lovely. What a nice, considerate and caring man to do that. Imagine if other drivers behaved like this instead of hurling abuse at each other. Imagine how different our experiences of driving would be?

Don’t get my wrong – I’m no angel myself in the car and even I have experienced drivers who have behaved in ways that are mildly irritating. I have however, tried to catch myself when I can feel frustration bubbling up to the surface and just taken a deep breath and focused on keeping any anger at bay. It doesn’t always work straight away, but it usually stops the frustration from turning into full blown anger. I always think of this quote to help me on my way:

It’s worth remembering that the person anger hurts the most is ourselves.

How to remain calm in the face of road rage

So, if you’re on the receiving end of road rage, what do you do? For me, I’ve noticed that how I react, really depends on what kind of day I’m having. If I’m in a really good mood and everything’s going well, I’ve meditated that morning, been to yoga, had a healthy breakfast then I can usually laugh it off.

If however, I’ve had ‘one of those days’ where I’m feeling tired and run down and overwhelmed with too much to do, the last thing I want to deal with is someone else’s unjustified behavior on the road.

So one of the easiest ways to brush off road rage is to ensure you start your morning right. For me, that means meditation or yoga, for you it might mean some other kind of exercise or regime. I would suggest that it does involve some kind of positive thinking because, in my experience if the first few thoughts you have in the day are positive, your day is much more likely to follow suit.

One of the most fun ways to react is to stop taking yourself so seriously and to just laugh. When you sit back and really look at how the other person is behaving it’s usually quite ridiculous. I mean grown men and women getting their knickers in a knott over something so menial as driving! Really, it’s insane!

When you laugh, it interrupts your stress pattern. So, if you’re laughing, then you can’t be annoyed or bothered by what’s happening. And let me tell you, if the other person sees you laughing, it will usually either confuse them or wind them up even more.

Know that the attack isn’t personal – because they don’t know you. Instead of taking it to heart, dissociate form the behavior and say to yourself mentally “That’s interesting that they are behaving in that way. I wonder what happened to them today to make them in such a filthy mood?”

Focus on the positives

Take a moment to remember that whoever is shouting is not a monster. It’s likely that they have a family and children that they love dearly and I’m sure they don’t behave in this way during the majority of their lives outside of their cars.

Remember that what you ‘re seeing is the worst side, and this is not a true reflection of who that person is.

Breathing affects your heart rate. So if you feel your heart start to race and feel under pressure to behave in a certain way on the roads as a result of someone else’s bullying, simply take a deep inhalation, pause for a few seconds and then release the breath.

This will literally slow your heart rate down and you will immediately feel more calm and relaxed.

Simple Life Strategy: How to Deal with Road Rage

1. Ensure your morning gets off to the right start. Choose to think positive thoughts and notice how your day will follow suit.

2. Laugh. Take the seriousness out of the situation and notice how ridiculous the other person’s anger is. Laugh and you can’t be angry!

3. Dissociate. Don’t take the attack personally. Consider what has happened to make the person behave in this way.

4. Be positive. Remember this person is not a monster, but a fellow human being showcasing their worst side. Remember they probably have a family and are capable of being loving and nice in other situations.

5. Breathe. Take a deep breath in, hold it and then release. Notice how much calmer you feel!

Know someone who rages on the roads? Send them this article 🙂

Sign up to the Simple Life Strategies Facebook page to get free tips on living a more balanced , happy and successful life.

Leave a Reply to Zoë B Cancel reply